Bitcoin $ 35,000 recovery is also heavy, and major Alto Ethereum is reversed in BTC 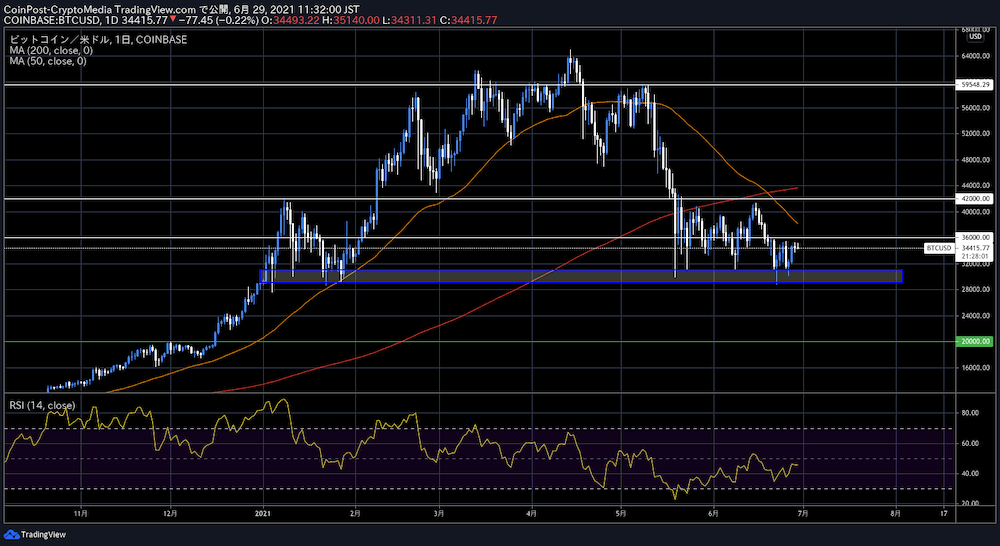 It fell back at $ 35,000 on the resistance line. It can be said that the price range is likely to be heavy because the price is high on the 25th and the half price return level within the current range. If we can break the resistance line up to $ 36,000, will we be able to see a further increase from $ 40,000 to $ 42,000, which is the barrier to the trend change?

BTC-denominated Ethereum (ETH) prices started to rise again after rebounding at the support line around 0.055 BTC. In July, with the implementation of EIP-1559, a major update “London” with a burn of base fee is coming up, and the progress of the test net is awaited. 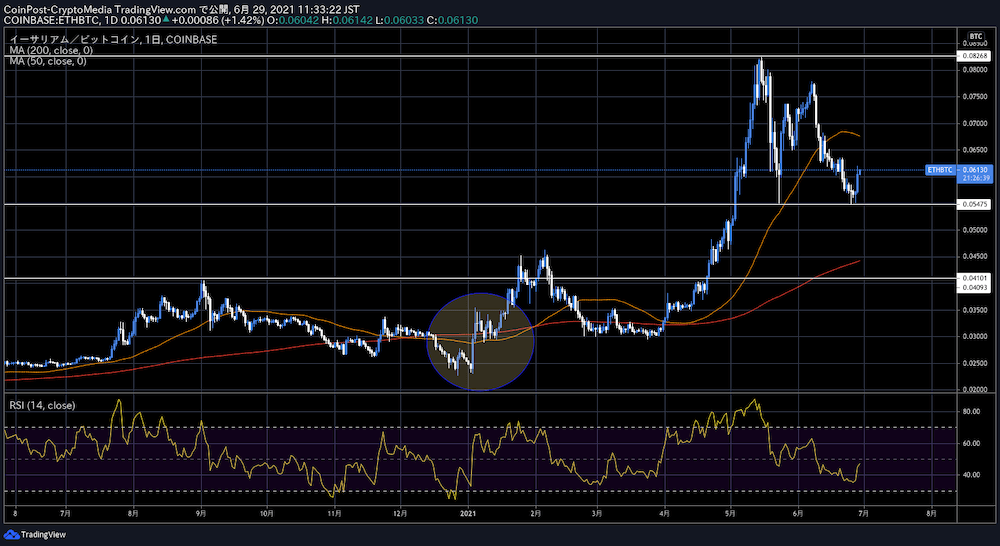 It seems that the revival of the DeFi (decentralized finance) market is indispensable for the recovery of Ethereum, which has the largest market capitalization in the alt market. If soaring, it is possible that the promising altcoin circulation color will re-emerge.

According to CoinMarketCap data, the total number of unique Bitcoin addresses (non-duplicate) is about 38 million as of June 28. It was the highest number in the past month since May 29th. When the price plummeted from a record $ 64,800 in April this year and the price halved, the number of unique addresses also plummeted, correlating with the sentiment.

Lyn Alden, the founder of investment firm Lyn Alden Investment Strategy, focused on Grayscale’s Bitcoin Investment Trust (GBTC) on the 29th. One of the factors behind the current decline in the market was the absence of Grayscale, which was observed to have a large inflow of Bitcoin funds last year.

Bears focusing on Tether’s impact on bitcoin over the past year would have probably done better to focus on the Grayscale neutral arbitrage trade instead.

When new competition resulted in the market taking away GBTC’s premium to NAV, the biggest bitcoin buyer stopped buying. pic.twitter.com/RoAarfw58N

In late 2020, GBTC absorbed a large amount of Bitcoin, boosting the bull market, Alden said. But nowadays, GBTC’s rarity is diminishing with the emergence of several other ways for institutional investors to gain exposure to cryptocurrencies, such as Canadian Bitcoin ETFs and CME Bitcoin futures. As a result, the price divergence (premium), which was significantly positive, turned into a negative discount.

What is Bitcoin Investment Trust (GBTC)?

A financial product for qualified investors provided by Grayscale Inc. of the United States. It has the advantage of being able to make Bitcoin-related transactions from a securities account. You can receive beneficiary certificates by depositing Bitcoin or US dollars in GBTC. The lockup period is half a year and can then be sold in the secondary market.

The operational scale of Grayscale’s GBTC is about 650,000 BTC, which is 3% of the total amount of Bitcoin issued.

Alden commented on the factors behind the downturn in the market: (1) the speculative funds of individual investors gathered in the Alto market, (2) Elon Musk’s remarks and ESG-related mining-related concerns, and (3) mass liquidation of leverage. (4) It points out the departure of momentum traders.

In mid-July, a grayscale investment trust (GBTC shares) was purchased six months ago, and the assets of accredited investors locked up for half a year are expected to be released. From December 2008 to January 2009, GBTC inflowed nearly $ 4 billion (about 440 billion yen). Above all, on July 18, the large-scale 16,000 BTC equivalent (about 650 million dollars) is expected to be unlocked.

Although it is not always sold in the secondary market immediately after the day, past trends may lead to increased volatility. JPMorgan Chase strategists warned that “it could be a headwind for the Bitcoin market.”

The impact of grayscale investment trusts on the Bitcoin market (Grayscale Effect) is explained in the following article.

The Chinese government’s crackdown on Bitcoin miners has caused an unprecedented drop in hash rates. Compared to the previous day, it recovered slightly to 73.2 EH / s, which was + 0.28%.

Regarding China’s regulatory trends, some experts have pointed out the impact of the 100th anniversary of the founding of the Chinese Communist Party on July 1, and there is a possibility that it will take a break if the event is passed.

From a medium- to long-term perspective, the decentralization of the hash rate to the world leads to a reduction in China risk and has a positive side. Some of the major minors are already rushing to move overseas to restart, and while the difficulty adjustment of Bitcoin is expected to make it much easier, the profit margin (profit margin) of the minors will further increase and the entry of emerging powers Opportunities are also expected.

Bitcoin Hashrate is at its lowest level since July 2019. It has dropped a full 70% off the top.

Great time to get into mining for those with access to cheap energy. pic.twitter.com/tUsARGXEOU

The next difficulty adjustment has a block height of 689,472 and is expected to be implemented around July 2.

Popular cryptocurrencies exchange Binance has announced today that it is closing down its futures and derivatives product offerings in three...

Representative Don Beyer of Virginia has recently submitted a bill that seeks to create a regulatory framework for digital assets....