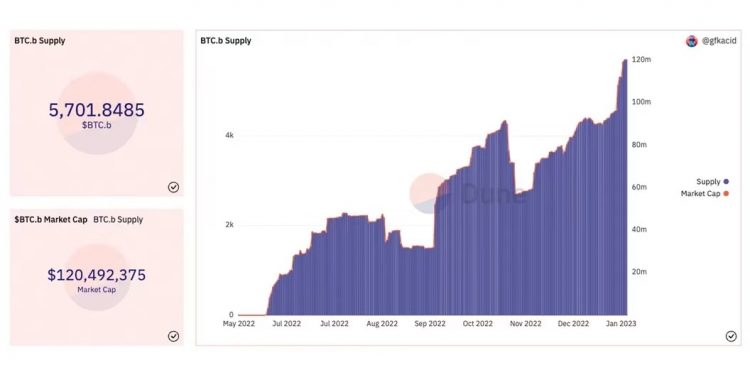 Bitcoin (BTC), bridged from the Bitcoin blockchain to the Avalanche blockchain, has surpassed the holdings of Bitcoin’s scalability solution, Lightning Network.

According to Dune Analytics, the supply of bridge BTC (BTC.b) on Avalanche reached a record high of 5,700 bitcoins (about $118.6 million) on January 17. Meanwhile, the Lightning Network has 4929 bitcoins.

This reversal delighted the Avalanche community and the project’s developers.

“It is a very nice milestone for Avalanche as the[bitcoin]supply on Avalanche surpassed 5,700 BTC, surpassing the Lightning Network in just a few months,” said Morgan Krupetsky of Ava Labs. 18, he wrote on his blog.

By the way, Wrap Bitcoin (WBTC) is a crypto asset that has a one-to-one value with Bitcoin and complies with ERC-20, a compatible standard for Ethereum blockchain, the world’s largest smart contract blockchain. WBTC gives Bitcoin holders access to Ethereum-based DeFi.

Krupetsky said BTC.b is a better option than Wrapped Bitcoin for institutional investors and Bitcoin holders looking to earn yield from DeFi.

“Many institutional investors I talk to allocate at least a portion of their holdings to Bitcoin, either for reserves or for portfolio diversification. To send or receive, or to earn yield, Avalanche’s BTC.b has become an easy vehicle,” Krupetzky said.

“Unlike wrapped bitcoin, BTC.b can seamlessly bridge bitcoin and avalanche whenever you want, at a relatively small cost,” continued Krupetsky.

GM Radio will be held for the first time in 2023, and guests will be executives from the development company of Ethereum L2 “zkSync”