Bitcoin maintains a solid high price range, and is the formation of a push point limited | Contribution by bitbank analyst

Mr. Hasegawa, an analyst at the major domestic exchange bitbank, illustrates this week’s bitcoin chart and analyzes the future outlook.

This week’s bitcoin (BTC) vs. yen exchange rate has been squabbling around 2.7 million yen, which is the dollar-denominated level of $2.1.

In the middle of the week, the BTC market was affected by the volatility of the dollar-yen exchange rate following the Bank of Japan’s decision to maintain its easing policy. U.S. stocks plummeted on the announcement. BTC also dropped below 2.7 million yen as a result, but the next day it recovered to 2.7 million yen again with the appearance of bargain buying. 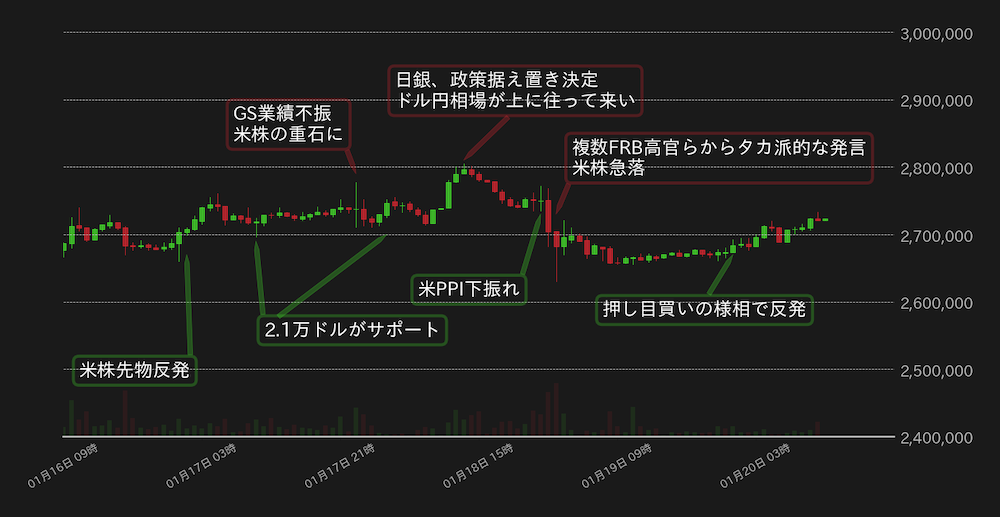 At the time of writing this article, it was reported that Genesis, a crypto asset (virtual currency) lending company, had finally filed for bankruptcy, and although the market has stalled somewhat, the impact has been limited as it has already been factored in. ing.

The three major US indices pushed strongly from the middle of the week, and BTC was also slightly affected, but the market has maintained its high price range this month, giving the impression that it is fairly solid. We had assumed that the US Producer Price Index (PPI) would rise further in December, but the Fed’s verbal intervention, which expressed concern last week, put a damper on the rise in BTC and stock prices since the beginning of the year. It looks like it was showered with

The S&P Global Purchasing Managers Index (PMI) and Gross Domestic Product (GDP) will be released next week as well. Recently, high-ranking FRB officials have made hawkish remarks one after another, and the US stock market has softened even if economic indicators have deteriorated (previously, it was speculated that the FRB would slow down its tightening pace when there were signs of a deterioration in the economy). was often risk-on).

Next week will be the media blackout period before the US Open Market Committee (FOMC) meeting, and it can be said that Fed officials will not make any statements to restrain the market. , will this week affect risk appetite as well?

However, as mentioned above, the BTC market is unusually firm. With the market returning to the level just before the FTX shock for the first time in two months, it is also pointed out that trend-following market participants may have gradually returned.

In the first place, the BTC market was in a tight spot around $20,000 from June to early November last year, and $18,000 (approximately ¥2,325,000), the lower end of the range at that time, is likely to provide strong support for the market. Before that, we are waiting for the psychological milestone of $20,000 and the 200-day moving average ($19,500), so we think that the market will be relatively shallow even if it makes a dip. 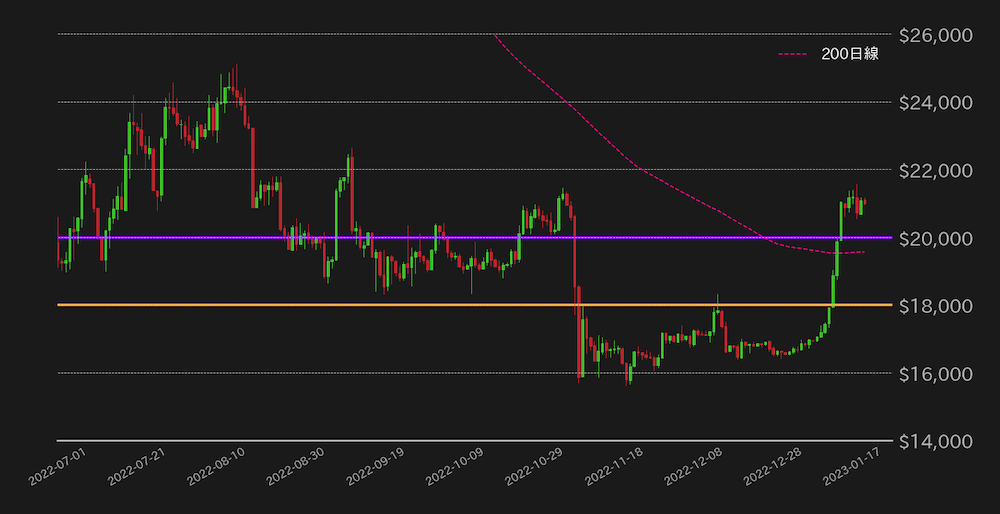 After graduating from a graduate school in the UK, he worked as an analyst in the FinTech industry and the virtual currency market at a venture company consisting of people from financial institutions. Market analyst at Bitbank Co., Ltd. since 2019. He has a track record of providing comments to major domestic financial media and contributing to overseas media.

Last report:Bitcoin is technically bullish this week, including three-way turnaround