In the US NY stock market on the 20th, the Dow rebounded by $330 (1.0%) higher than the previous day. Among crypto-asset-related stocks, Coinbase, the largest US exchange, rose 11.6%, MicroStrategy, which holds a large amount of Bitcoin, rose 8.39%, and BTC mining giant Marathon Digital rose 9.94%. 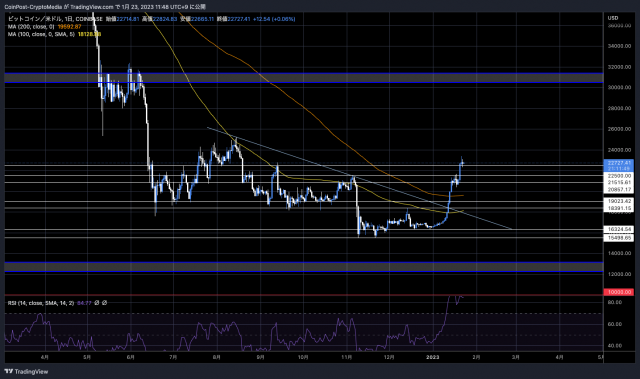 In the US time, there was also a scene where profit-taking selling dominated, but it soon rebounded. It closed the week at $22,714. This is the highest level since August last year.

Although the RSI (Relative Strength Index) below the daily chart has begun to overheat and indicates an “overbought” level, after repeated crashes in 2022, the monthly RSI is still at the bottom of 2019. . (Figure below) 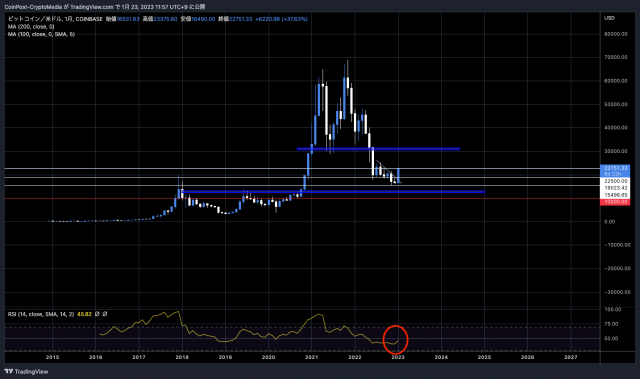 Geopolitical risks such as the situation in Ukraine and macroeconomic uncertainty continue to be concerns, but inflation has peaked out, and the pace of interest rate hikes by the Fed (Federal Reserve System) is slowing down as we enter the final phase. be. It is expected that the focus of the market will shift to whether or not the US and European countries will fall into a recession in the future.

With the major upgrade “Shanghai” scheduled for March, the number of Ethereum addresses with balances greater than zero is also steadily increasing. Ethereum hit a record high of 92.5 million addresses this week, according to Glassnode data.

According to blockchain software developer Alchemy’s “Web3 Development Report for Q4 2022,” the number of smart contracts executed on Ethereum mainnet increased by 300% in 2022.

Axie’s monthly active users (MAUs) peaked in 2020 and have fallen to their lowest level since November 2020. According to activeplayer.io stats, it peaked at 2.8 million MAUs, but is now down to 430,000. 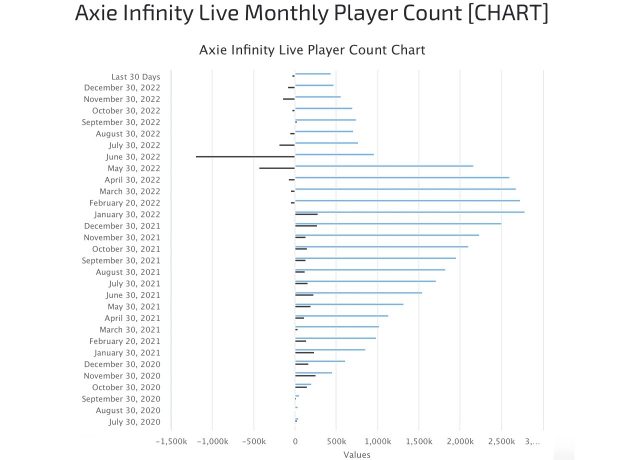 Even so, it still has a large number of users, and like STEPN, a strong community supports the ecosystem. Axy’s platform chain Ronin’s trading volume increased by 41% from the previous month, showing a recovery trend.

According to Dapp Radar, the platform has seen a 214% increase in sales volume since this year, and a 59% increase in the number of unique active wallets used on the AXS network.

With the recovery of sentiment in the crypto asset market, the search for promising altos is progressing. Week-on-week, Aptos (APT) rose 67% and Ethereum (ETH) Layer 2 network Optimism (OP) rose 24%.

Aptos is an L1 blockchain that focuses on security and scalability, and is also known to have been founded by the former developers of Diem (formerly Libra), which was being developed by Meta (formerly Facebook).

Optimism has completed the transition to the testnet on the 13th, ahead of the large-scale upgrade “Bedrock” scheduled to be implemented in the first quarter.

We’re almost ready to bring you the cheapest, fastest, most minimal EVM-equivalent rollup architecture, ever. Only 3 steps remain: