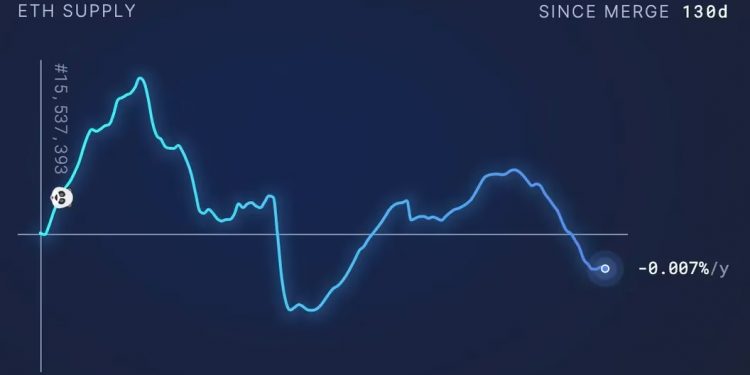 Ethereum (ETH) is once again a deflationary asset as the market rebounds.

Marcus Sotiriou, a market analyst at cryptocurrency broker GlobalBlock, attributes the increase in Ethereum burn volume to a surge in NFT trading volume on the back of the cryptocurrency market rally.

More than 14,700 Ethereum (approximately $24 million, or ¥3.1 billion) were burned in the past seven days, of which approximately 3,400 Ethereum was due to NFT transactions (data from ultrasound.money).

NFT trading volume has surged more than 5% over the past week to $242 million, according to cryptoslam data. 80% of the trading volume, about $195 million, was reportedly on the Ethereum network.

Many market players expected Ethereum to become a deflationary asset after last fall’s Merge, or transition from Proof of Work (PoW) to Proof of Stake (PoS). .

Ethereum’s inflation rate is also due to EIP (Ethereum Improvement Proposal) 1559, a mechanism that burns transaction fees. With EIP1559, Ethereum is designed to burn more as trading volume increases.

Amid market volatility triggered by the bankruptcy of the cryptocurrency exchange FTX in November, Ethereum saw an increase in burn volume and deflation, but after that, the market continued to stagnate and usage declined, leading to inflation. rice field.

However, as the market has recovered, the use of the Ethereum blockchain has surged and deflation has returned. According to Etherscan data, over the past six months, burn volumes have been around 1,000 to 2,000 Ethereum, before increasing to over 2,700 Ethereum on Jan. 18.

2023, where we can expect technology fields such as AI ── US ARK Invest