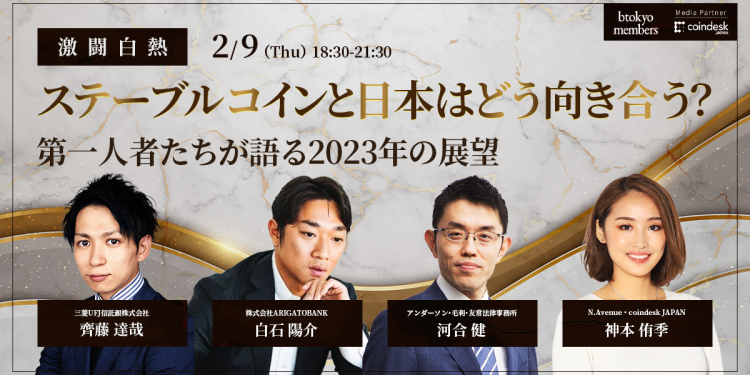 Efforts to realize the use of stablecoins are finally accelerating in Japan as well. Stablecoins generally refer to crypto assets (virtual currencies) whose prices are linked to legal currencies. Globally, it is already being actively used when trading crypto assets.

USDT (tether) and USDC (USD coin), which are typical dollar-linked stablecoins, each have a market capitalization of tens of billions of dollars (several trillion yen). However, at domestic exchanges, the legal rules have not been developed and the situation continues to be unusable.

Rules for making these stablecoins usable in Japan are now being prepared at a rapid pace. The revised Fund Settlement Act, which forms the framework, has already been enacted in 2022. Currently, we are soliciting public comments (until the end of January) on the draft cabinet ordinance that sets out more detailed rules before the law comes into force in 2023.

However, even if it is called a stablecoin, there are various contents, such as multiple mechanisms to stabilize the price. It is still fresh in our minds that in 2022, the tragic collapse of UST (Terra USD), which had been linked to the dollar.

So, what exactly is a “stablecoin” that can be used in Japan? And what changes will occur in society and the economy when stablecoins become available?

An offline event where lawyers and practitioners familiar with this field gather to discuss various issues related to stablecoins “How Japan faces the heated debate of ‘stablecoins’? Prospects for 2023 as told by leading figures” will be held in Tokyo on February 9 (starting at 18:30).

* Apply for btokyo members membership from this page

Opportunity to hear the latest information directly from experts

Mr. Tatsuya Saito of Mitsubishi UFJ Trust and Banking, who is working on the development of stablecoin issuance and management platform “Progmat Coin”, Mr. Yosuke Shiraishi, Chairman of Japan Crypto Asset Business Association Stablecoin Division and CEO of ARIGATOBANK, will be on stage. Mr. Ken Kawai, an attorney at Anderson, Mori & Tomotsune. The organizer is btokyo members, and coindesk JAPAN is the media partner.

It is an offline and real-only event with a capacity of 60 people (lottery system), and a social gathering is prepared after the talk session. The venue will be in Chiyoda-ku, Tokyo, and the winners will be notified at a later date. Therefore, it is an opportunity to obtain valuable information from cutting-edge experts working on stablecoins.

Applications for btokyo members membership are accepted on this page.

Joined in 2010. As a corporate sales person, he is in charge of various finance and real estate projects. After that, he was involved in business planning and IT planning. In 2016, after the establishment of the FinTech Promotion Office, he planned and promoted the digital strategy of Mitsubishi UFJ Trust and Banking as his first full-time staff. He will launch the information bank platform ‘Dprime’, the digital securities platform ‘Progmat’, the stable coin platform ‘Progmat Coin’, and the functional NFT platform ‘Progmat UT’. In 2022, he will announce that the digital asset platform business will be an independent company and will be appointed as the representative.6 patent registrations

After joining Internet Initiative Japan, joined Yahoo Japan Corporation in 2012 after being seconded to the SBI Group. After launching Y! Mobile, Yahoo! Money, etc., he became the general manager of payment products. He launches PayPay. After that, he joined DeCurret Co., Ltd. as CTO. He launches a digital currency business. In 2020, he became CEO of ARIGATOBANK Co., Ltd. As CEO of MZ Cryptos Co., Ltd. and Outside Director of Hashport Co., Ltd., he is also involved in Web3 related businesses. He also makes recommendations as an industry group as chairman of JCBA’s Stablecoin Division, and advises on ICT policies as a fellow of the Tokyo Metropolitan Government.

Joined Yahoo Japan Corporation (currently Z Holdings Corporation) in 2013. After engaging in media and advertising business development centered on Yahoo! News, he was in charge of launching new businesses with overseas tech venture companies. Since 2018, he has been engaged in research and business development in the blockchain area at Z Corporation, a group investment fund. Since 2018, he has been responsible for the launch of N.Avenue Co., Ltd., a media company that disseminates information in the next-generation financial field, established by the company’s investment, and is currently the president. He manages “coindesk JAPAN”, the Japanese version of CoinDesk, one of the world’s leading digital asset media outlets, and “btokyo”, one of the largest blockchain conferences in Japan.

DCG, a major cryptocurrency with liquidity problems, explains points about the impact on the market