GM Radio will be held for the first time in 2023, and guests will be executives from the development company of Ethereum L2 “zkSync” 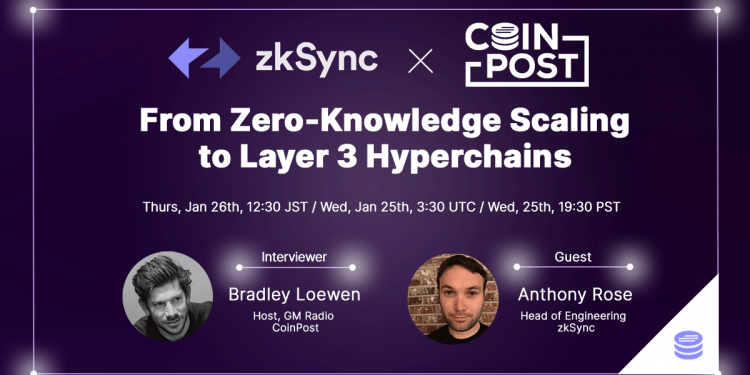 Yat Siu (@ysiu), chairman of Animoka Brands, a major Web3 (decentralized web) company, participated as a guest at the 2nd “GM Radio” delivered by CoinPost Global, a global version newly established by CoinPost, on the 23rd of last month. We invited Mr. Benjamine Charbit (@Ben_Charbit) from Darewise Entertainment to conduct an interview on the theme of “Leading the Open Metaverse with Innovative Blockchain Games.”

The number of views exceeded 1,000, and the response greatly exceeded expectations. Listen to the archive here.

This time we have invited Anthony Rose, Head of Engineering at Matter Labs, as a special guest. The company is developing the L2 solution “zkSync” for the crypto asset (virtual currency) Ethereum (ETH).

Matter Labs is developing a technology to improve the scalability of Ethereum by utilizing cryptographic technology called zero-knowledge proof, which is currently attracting a lot of attention. The company’s mission is to “populate the public blockchain into the mainstream and accelerate the financial revolution.”

The company is based in Berlin, Germany. The team is globally distributed, but most of the employees work in Europe.

Matter Labs announced in November last year that it had raised approximately ¥25 billion ($200 million) in a Series C funding round. Blockchain Capital and Dragonfly are the lead investors, with a16z, Variant and LightSpeed ​​Venture Partners also participating.

The funds raised will be used to operate projects built by Matter Labs and to provide funding for third-party projects launched on the ecosystem. Other investors in Matter Labs in the past include the Ethereum Foundation and Coinbase.

One of the reasons why Matter Labs is attracting so much attention is that it is developing a technology called “ZK Rollup” that is compatible with Ethereum’s virtual machine (EVM). Rollup is a scaling technique that attempts to reduce network congestion by processing some transactions off-blockchain while leveraging the security of the main blockchain.

ZK rollup is a technology that combines this rollup with zero-knowledge proof. zkSync is a solution that introduces ZK Rollup. It has been said that ZK rollup is difficult to make compatible with EVM, but a project by Matter Labs and others has been working on realizing it.

Relation: What is “Rollup”, a solution to the scaling problem | Detailed explanation of the mechanism and points to note

Last October, version 2 of zkSync was launched on the mainnet. However, this launch is in the “Baby Alpha” stage and is not yet available to external projects and users.

In the future, after the stage of “FAIR LAUNCH ALPHA” in the 1Q (January to March) of 2023, when it becomes “FULL ALPHA” in the 2Q (April to June) of the same year, all projects and users will be able to use it. going to be

In addition, zkSync is also interested in the development of the L3 network “HyperChains” and the possibility of issuing its own token.

Relation: Projects with high possibility of airdrop in the future, such as SUI and zkSync

We will distribute “NFT” limited to participants to everyone who watched GM Radio’s live streaming on the official Twitter Spaces. Please refer to the following for how to receive it.

In the future, we are planning campaigns only for those who have collected multiple limited NFTs. It will be distributed free of charge to all participants, not on a first-come, first-served basis. Please take this opportunity.

Please follow the official account of the Global version so that you do not miss the announcement of the live broadcast.