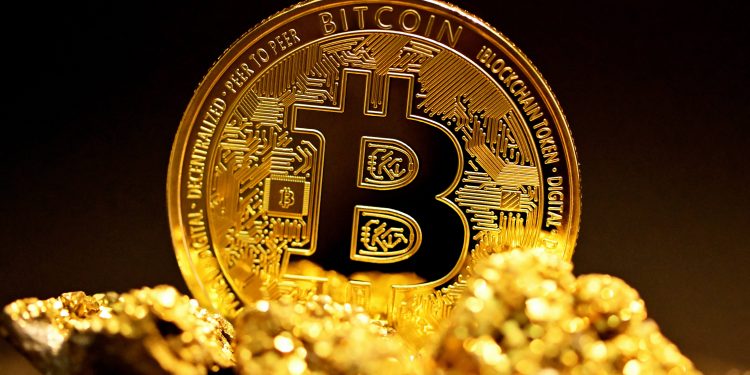 Multinational investment bank Goldman Sachs said in an investor note that Bitcoin could easily reach $100,000 if investors replaced gold with Bitcoin as a “store of value”, Bloomberg reported Tuesday.

Goldman Sachs expects Bitcoin to gain gold’s market share due to the widespread adoption of digital assets. Gold, which has largely been touted as a means of storing value, saw a drop of 5% compared to Bitcoin’s rise by more than 70% in 2021.

The banking giant predicted the price after calculating the market capitalization after adjusting the floating-point numbers. A floating point refers to the quantity of a particular asset in the market.

“Bitcoin currently commands a roughly 20% share of the “store of value” (gold plus Bitcoin) market,” analysts wrote in the note. “We think that Bitcoin’s market share will most likely rise over time as a byproduct of broader adoption of digital assets.”

“Hypothetically, if Bitcoin’s share of the “store of value” market were to rise to 50% over the next five years (with no growth in overall demand for stores of value) its price would increase to just over $100,000.”

Goldman Sachs pointed out that there may be use cases other than value storage as a factor for increasing Bitcoin’s share. It noted:

“Bitcoin may have applications beyond simply a “store of value”—and digital asset markets are much bigger than Bitcoin—but we think that comparing its market capitalization to gold can help put parameters on plausible outcomes for Bitcoin returns.”