Less than 3% of the mixed cryptocurrencies are used for illicit purposes, claims Chainalysis

If blockchain analysis company Chainalysis is right, only a small fraction of the cryptocurrencies sent to and from bitcoin mixers are used for illicit purposes.

In a recent webinar titled Cryptocurrency Typologies: What You Need to Know About Who in Blockchains, blockchain analytics firm suggested that users of mixing services take advantage of the option for privacy reasons. Many darknet users, on the other hand, send their coins directly from cryptocurrency exchanges.

That said, while they come from a small minority of all users of mixing services, a large fraction of the stolen coins ends up being mixed.

“A lot of people are using mixers just for personal privacy,” explained Hannah Curtis, product data manager at Chainalysis, during the webinar. “But we do know that a lot of illicit funds end up in mixers,” he adds.

Bitcoin mixing
The Chainalysis webinar presented an overview of blockchain use cases, which included blockchain analysis of mixers and darknet markets, but also mining groups, ICOs, hosted wallets, ransomware and more. One of the perhaps more surprising conclusions is that bitcoin mixers, in both centralized and “decentralized” versions, seem to be used much more frequently for privacy purposes than for illicit activities.

Specifically, Chainalysis believes that 8.1% of all mixed cryptocurrencies were stolen, while only 2.7% of cryptocurrencies had been used in darknet markets. As such, fewer than 1 in 11 cryptocurrencies sent to mixers could be identified as being used for illicit purposes. In addition, 1.9% of mixed coins come from gambling or betting sites, which may be illegal depending on the jurisdiction of users and sites. 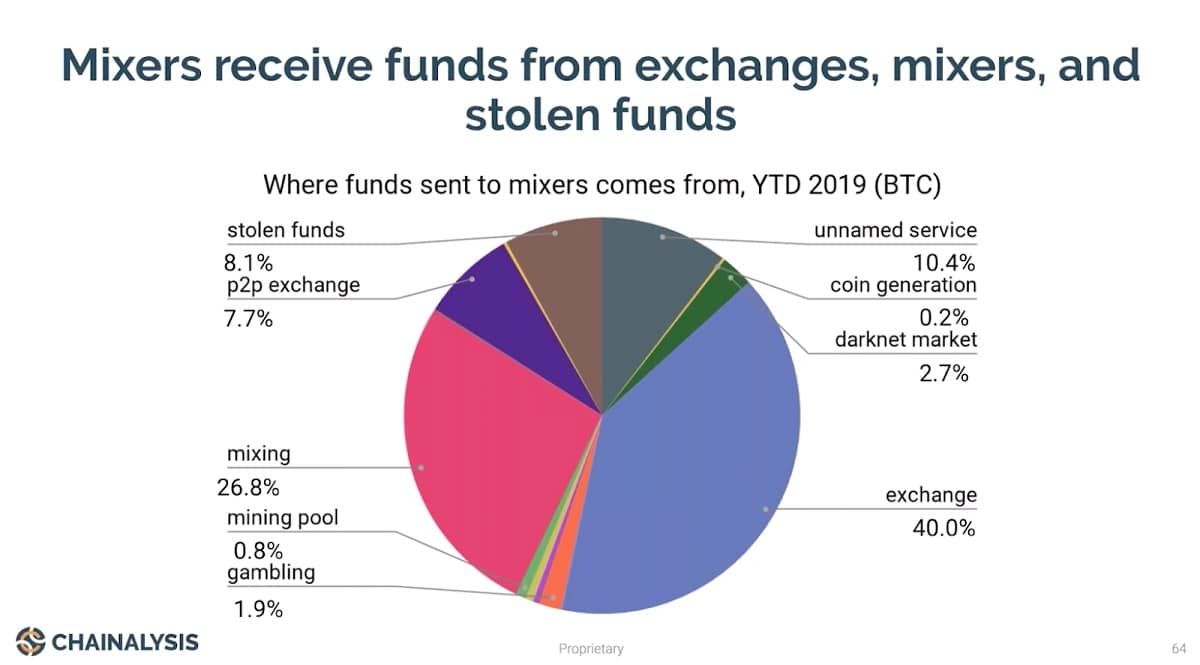 Decentralized Mixers
While Chainalysis did not go into detail, centralized mixers appear to receive a higher proportion of coins used in illicit activities than “decentralized” mixers. For example, Bestmixer, a centralized mixer that was shut down by police in early 2019, received many cryptocurrencies for which the destination origin could be identified as illicit. The service mixed more than 27,000 cryptocurrencies.

Other findings
Throughout the webinar, Chainalysis also referred to other users of the cryptocurrency, although it did not always provide specific figures or statistics.

The analytics firm confirmed that the use of bitcoins for terrorist financing has been on the rise, for example, but did not detail how much has increased. (A recent article in The New York Times found the sums “probably small”). It was also mentioned that the number of bitcoin ATMs has increased exponentially in recent years to a total of 4,000 machines worldwide, and it was noted that these ATMs are sometimes used to sell cryptocurrencies won in the darknet markets.

Meanwhile, legitimate use of cryptocurrencies also appears to be on the rise, according to Chainalysis. Payment processors such as BitPay, Flexa, Coinpayments, WebMoney, Coinify, and Square have experienced significant volume growth in 2019, with more than 50% more transactions compared to the beginning of the year.